FETAL SPINE WHEN TO RAISE ALARM

With the advent of first trimester screening, high resolution equipments andtransvaginal ultrasound, reasonable organ anatomy can be studied as early as 12 weeks of gestation.  This helps in the diagnosis of major lethal anomalies like anencephaly, body stalk anomaly, cystic hygroma to name a few. While it is possible to pick up major spinal abnormalities at this gestation, often not enough attention is given to the spine, as the focus and interest is on getting a good nuchaltranslucency in which the spine is in posterior position. It is obvious that alumbosacral spina bifida should be anatomically present at 12 weeks but goes undetected till the second trimester scan.

1.      Around the notochord which is the vertebral body


2.      Around the neural tube which forms the  vertebral arches

The mesenchymal cells migrate to the presumptive region of the vertebra.  Thechondrification occurs around 6 weeks, which forms the centrum. The cartilageousmass transforms into a cartilaginous model over which the bone forms which is around 10 weeks of gestation.

The bony ossification (primary ossification) occurs in utero. There is one vertebral body and two vertebral arches (laminae). The secondary ossification centres - tip of the spinous process, two transverse processes, articular processes are cartilaginous inutero. Ossification of typical vertebrae begins during the embryonic period and usually ends by the twenty-fifth year

Ultrasound of the spine

The sacral tapering is observed in the parasagital scan in all fetuses beyond 22 weeks of gestation.

The three planes of imaging and the structures seen

2. Axial section vertebral body and the two laminae seen converging with skin line on top of it. 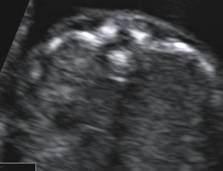 Abnormalities of the vertebral arch (Laminae)

·        Closed neural tube defect – Normal posterior fossa. Diastematomyeliaotherwise termed as split cord malformation is suspected when there is widening of the laminae with a bony spicule or fibrous spur which splits the cord into two. This commonly occurs in the thoracolumbar region,rarely can affect cervicodorsal region. Associated hemivertebrae can be present. 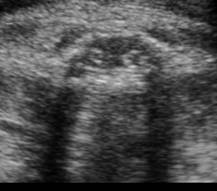