The normal fetal bowel varies in appearance during gestation. The small bowel appears brighter than the liver. The fetal small bowel can be seen sonographically as early as 12 weeks of gestation. Between 12-16 weeks, it appears homogenous. 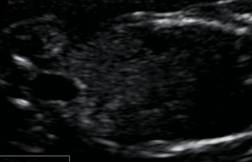 As pregnancy progresses, the bowel becomes more heterogenous, centrally located and well defined with echogenic walls and hypoechoic contents. Late in pregnancy discrete fluid filled loops of bowel can be seen in virtually all fetuses. 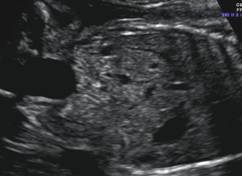 Individual segments of small bowel should not exceed approximately 7-10 mm in diameter and 15 mm in length.

Peristalsis within the fetal bowel can be seen as early as 16 weeks of gestation.

The large bowel is not clearly recognizable with prenatal sonography until the early third trimester. Thereafter it becomes increasingly easy to recognize. 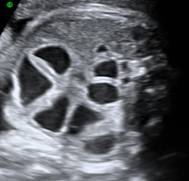 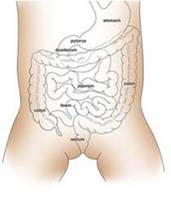 —        Nearly all newborns have cystic fibrosis

—        All the above findings are non specific and definitive diagnosis is difficult. 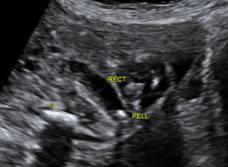 ·        Rarely presents prenatally, but when it does it is usually due to total colonic agangliosis.

·        Sonographic features are non specific and rare. May be seen as dilated bowel segments and mild polyhydramnios 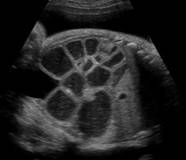 Bowel loops twist around the mesenteric artery or