When is it done?

The optimal time for doing a combined first trimester screening is from 11 weeks to 13 weeks 6 days. The CRL should be a minimum of 45 mm to a maximum of 84 mm.

2.      The biochemistry markers that are used for first trimester screening are free b-hCG and PAPP-A these are most sensitive between 9 - 11 weeks.

Step 3: Use appropriate software for recalculating the risk for a specific NT. If Biochemical testing is also done (free beta- hCG & PAPP-A), incorporate it into the software and predict combined risk

The process of screening involves taking note of some maternal criteria. These include

Accurate dating of pregnancy is the first step to the process of screening. This is either established by an earlier scan or at the time of the 11 - 13 weeks scan by taking an accurate CRL. As interpretation of NT is based on CRL, it is important that the CRL is taken in the standard position and the baby is not too flexed or extended when the measurement is taken. 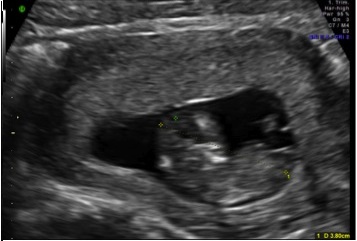 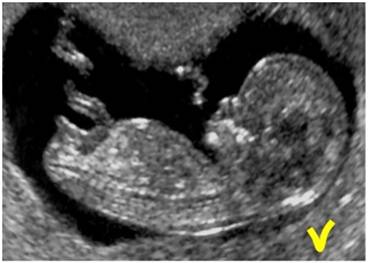 Nuchal translucency is the sonographic appearance of subcutaneous accumulation of fluid behind the fetal neck in the first trimester of pregnancy. The term translucency is used, irrespective of whether it isseptated or not and whether it is confined to the neck or envelopes the whole fetus. The incidence of chromosomal and other abnormalities is related to the size, rather than the appearance of NT.

Fetal NT increases with gestation. For given CRL, each NT gives a likelihood ratio. Each NT value for a specific CRL has a likelihood ratio (LR) and larger the NT, higher the LR. An NT > 3.5mm is above the 99th centile and warrants direct testing.

The Nuchal translucency measurement is to be taken according to the FMF specifications. 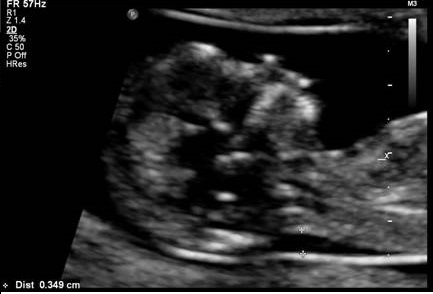 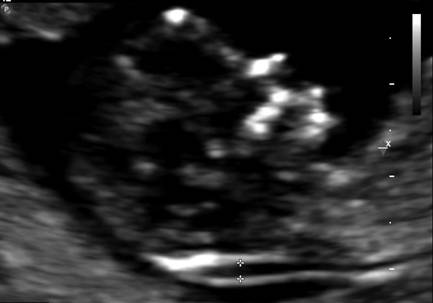 ·      A mid-sagittal section of the fetus should be obtained and the NT should be measured with the fetus in the neutral position.

·      Only the fetal head and upper thorax should be included in the image. The magnification should be as large as possible and always such that each slight movement of the calipers produces only a 0.1 mm change in the measurement.

·      The maximum thickness of the subcutaneous translucency between the skin and the soft tissue overlying the cervical spine should be measured. Care must be taken to distinguish between fetal skin and amnion.

·      The calipers should be placed on the lines that define the NT thickness – the crossbar of the caliper should be such that it is hardly visible as it merges with the white line of the border and not in the nuchalfluid.

·      During the scan, more than one measurement must be taken and the maximum one should be recorded.

Use of additional markers 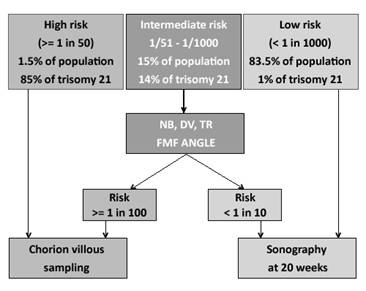 When a result of screening comes back as screen negative, no further testing is generally warranted because it suggests a ‘low risk’ of having a baby with Down syndrome. When a woman screens positive, it does not mean that the baby is affected. This only puts her in a higher risk group and further invasive testing is offered for fetal karyotyping.

The advantages of first-trimester screening extend beyond the observed higher detection rates. The main advantage for the majority of women is the earlier reassurance provided to those with ‘low-risk’ results. Those who are  screen positive can have a CVS and diagnosis by the 14th week. Furthermore, for those who choose to terminate an aneuploid pregnancy, decisions can be made early and social issues can be handled better. Complication rates are also lower at earlier gestations.

A range of abnormalities other than aneuploidy have been associated with increased nuchal translucency. These include cardiac anomalies, diaphragmatic hernia, skeletal dysplasia, and abnormal lymphatic drainage associated with neuromuscular disorders. Therefore, identification of an increased nuchal translucency measurement should prompt not only a diagnostic test for aneuploidy, but also a thorough anatomic survey for structural anomalies and a detailed fetal echocardiogram in the case of a normal karyotype.

A significant number of anomalies can be picked up at this gestational age. With the increasing use of higher resolution machines a detailed anatomical survey can be done at the 11- 13 week scan.